IT’S MORE THAN JOB…IT’S A CAREER! 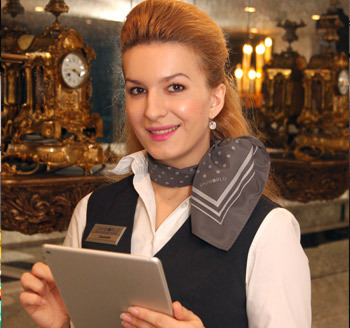 Daniela graduated with a degree in Economics and Finance in 2009. Soon after, she passed by the office of a recruitment agency and saw an advertisement for a job on a ship. During an interview a few days later,  she was asked if she would consider a job as a waitress. On a whim, she said yes. Two weeks later she found herself onboard a ship in Amsterdam!

After six months as a waitress, Daniela expressed her interest in a receptionist position, a role the assumed the next sailing season. She now has three seasons of experience as a Purser, working as the Hotel Manager's right hand and overseeing the ship's front desk staff. She eventually would like to become a Hotel Manager.

PROBLEM SOLVING SKILLS ARE THE KEY

Problem-solving skills are of the utmost importance when you work at the front desk and are the first point of contact for guests, especially when they request assistance. To be successful in this role, Daniela says you need to think on your feet and have the ability to come up with creative solutions.

Daniela offers this advice to anyone considering a career on a ship: You must be passionate about what you do, but this passion can come later – you can learn it! Just have to stay motivated and believe in yourself. Good luck in your career Daniela, we certainly believe in you!

If you do not find current openings that meet your career goals, please check back soon.